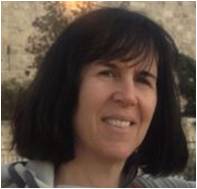 Einat Liebenthal, D.Sc., is a cognitive neuroscientist with expertise in the neurophysiology of speech and language perception in the human brain. She graduated from the Hebrew University with honors in biology, trained in auditory electrophysiology at the Technion Israel Institute of Technology, and went on to a postdoctoral fellowship in speech electrophysiology at the Albert Einstein College of Medicine. She worked for over a decade at the Medical College of Wisconsin, leading research programs funded by the NIH/NIDCD on the neurophysiological basis of speech perception, as studied with multimodal neuroimaging.

Since joining the FNL in 2012, Dr. Liebenthal became interested in language deficits and language-based interventions in psychiatric disorders. This line of research focuses on the role of language in modulating emotion perception, and in mediating psychotherapeutic effects, across negative mood disorders. Functional magnetic resonance imaging (fMRI) and electroencephalography (EEG) are used to study the neural dynamics and interactions of language and emotion networks with high spatiotemporal sensitivity. This research is supported by the Brain & Behavior Research Foundation (NARSAD).